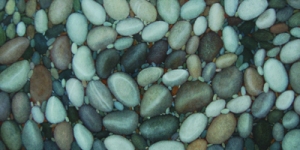 TM7833 Tumble and Roll #1 18x36, first version, oil on panel - The painting started as a straightforward composition of smooth, tumbled stones that one might find along the coast. The colors are muted: the goal was to create an interesting pattern. At first, the result seemed pleasing to me. However, over time, I decided the painting didn't say enough about the geography of place, and there wasn't enough diversity in the detail to sustain my attention. I eventually decided to try again.

TM7833 Tumble and Roll #1 second version, 18 x 36 oil on panel – After living with the first version of Tumble and Roll #1 for a while, I decided the it was too obvious, too stark in its contrasts, and just not interesting enough. I took a coarse brush loaded with thin, dark paint and loosely brushed it over the entire painting. I then went back into the painting with warm glazes and stippled highlights, trying to find a more harmonious balance of value and tone, while keeping some of the new striated texture in the rocks. It seemed to work, so I set the painting aside. Sometimes you just have to live with something for a while before you know if it is finished.

(Sold) TM7833 Tumble and Roll #1 18×36 oil on panel – The final version of the painting reveals many adjustments, though the basic composition remains familiar. Cool tones were added, and glazes and stippled highlights subdued the textural striations on the stones (seen in the second version). I also decided to enhance the geographic details. I painted in the green slime that surrounds wet stones in tidal pools, and added some debris caught between the rocks. Is the painting finished? Perhaps.

I’m always surprised by the process of painting.  A simple idea can metamorphose into something far more complicated and intricate – the reverse can also happen.  While the story of Tumble and Roll #1 took well over a year to finish, other paintings seem to resolve themselves quickly, or even take off in a totally unexpected direction.