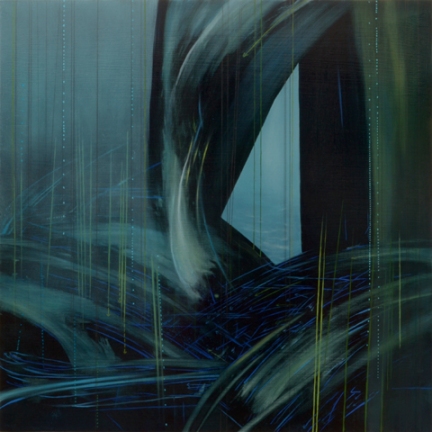 Composition for Strings and Rain, a new addition to the Water Music Series, was begun by rolling a layer of blue-black paint onto a panel. Using a scrunched plastic bag, paint thinner, and paper towels,  the central, sweeping gestures of wave and water were executed.  This initial gesture was refined by accentuating the highlights and layering green and blue glazes. The incidental lines left by the edges of the roller were developed by tracing them with green, yellow-green, and blue paint applied with a fine brush. Additional lines were drawn in with a soft graphite pencil, sealed with a touch of alkyd medium. Short arrows of blue and blue-violet followed the direction of the “waves.” The central triangle was defined with a gray-blue tone, and a suggestion of water was painted in then blotted out, leaving just the barest hint of action. Additional glazes were used to adjust tones in the painting, and the last step was to paint small dots, suggestive of both moisture gathering on a web and notes finding, and climbing,  their assigned strings.

When I started the painting, my only “idea” was to start with a gesture of water and see where it would lead, taking advantage of any chance effects that happened during the initial process. In other words, trust the gestures! The feel of rain falling, hinted at by the roller tracks, was the result of recognizing and exaggerating what was already there.

Below is an enlarged detail from the lower center of the painting. Enjoy! 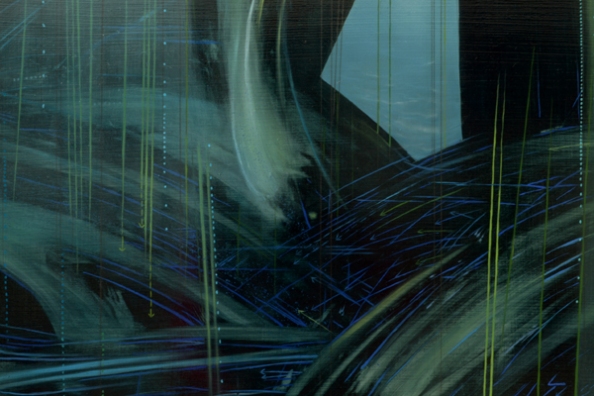 4 thoughts on “Composition for Strings and Rain”