After a lushly wet and green summer, late August brings a touch of gold to the pond. The lilies are still blooming, but now the surrounding reflections are picking up new color. I was surprised to find a violet, maroon, gold, and green color scheme (with hints of blue sky).  The colors bring a new mood – one that is perhaps more melancholy, but still beautiful. Enjoy! 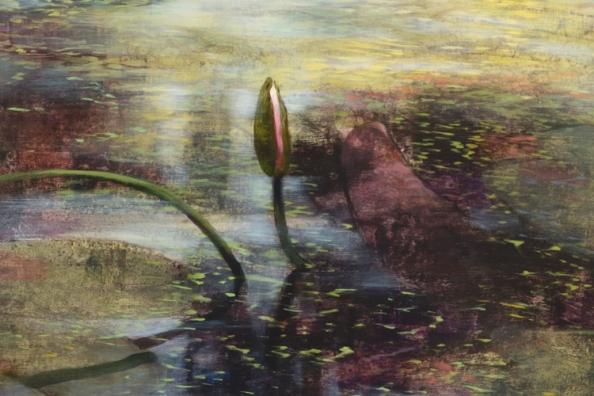 Technical painting notes – I started by rolling a mixture of burnt sienna and dioxazine violet onto the panel, then used rags and shaped paper towels to wipe out some of the negative shapes around the lily pads. Plastic wrap and solvent created textures. I also dripped solvent onto the (still wet) paint and blotted.  My goal, as always, was to create an interesting abstract pattern that suggested the essential forms and composition of the painting. Translucent layers of glaze were applied once the initial layer of paint was dry. I chose to enhance the subtle patterns in the initial layer rather than force the painting to “bend” to my original idea. If something interesting happened, I let it be. As the washes of sky began to delineate the pads, I used small marks of semi-opaque green to create the duckweed that was overlaying parts of the water. As the water’s surface took form, the sense of depth increased. At this point I decided it was time to add the lilies, but with the criteria of using as few strokes as possible and keeping them fully integrated with the rest of the painting. I wanted them to be a lovely clue that would push the abstraction toward reality, while not losing the mystery.