The question is how real and how much. I love every detail of the scene, but seeing too much is as awkward as seeing too little. And once the painting is underway, the physicality of the paint calls for its own, justifiable reality. When do you let the accidents and drips remain, and when to you exercise control?

Later that Year explores these dilemmas by way of autumn trees reflected in the pond. I began the painting by rolling on a paint layer of Venetian red edging into an umbery green, then manipulated the wet paint by wiping out, scraping into, spritzing with solvents, and spattering. The goal of the first layer is a clear structure (composition) with interesting textures. Once that layer was dry, I started painting the sky as negative shapes between foliage and tree trunks. I didn’t want to cover the underlayer completely, as the textures showing through added dimension and interest on closer inspection. As I worked, I realized that it would be interesting to let more of the abstract underpainting show through – opening up the sense of space in the painting. A last touch was the addition of some floating leaves in the upper right and right of center to reinforce the flat plane of the water.  Detail below. Enjoy. 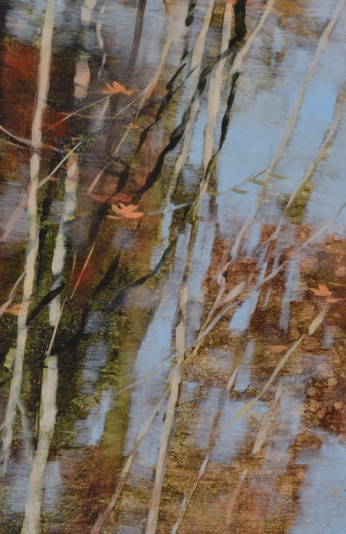