When I first listened to Brian Eno’s compact disk “Neroli,” I enjoyed the music, but wasn’t sure if it would be a disk to play repeatedly. It sat in the studio for a few months next to “Discreet Music” and Eno’s Harold Budd collaborations getting dusty. I finally gave it another chance in June, but this time I really listened, and began work on a painting that would be an interpretation of Neroli using themes from my pondscape series. I listened to Neroli, and only Neroli, for the entire time I was painting.  I let my brushstrokes match the tempo of the music. I looked for equivalents of tone and contrast, letting the undulations and whispers in the music inform the mark-making. As I worked, I thought of the illustration on the cd’s cover, a graphic mapping that reminded me of an illustration I had once seen of a piano roll composition and score. I began to think of the marks as notes, or intervals, to be layered into a chord of color. Using a silicone scraper, I scraped away the intermittent wet glaze layers to reveal subtleties in the paint below. The dashed scrapes were also timed with the music. You might say I became one with Neroli and the pond. It was a liberating experience. By painting with the music I discovered an unexpected layer of abstraction in the pondscape, and became addicted to Mr. Eno’s composition. Merci! Details below. Enjoy.

TM8560 Pondscpae for Brian Eno – detail with tree reflections from right side – note the calm yet staccato layers of scraping and additive marks. 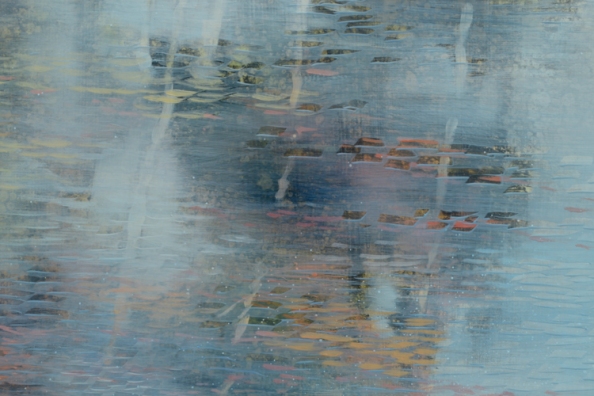 TM8560 Pondscape for Brian Eno – detail from right side showing more transparent layers and scraping. THe scrim on the pond’s surface obscures the clarity of the reflections, muting the effect much as Eno’s music softens the patterns of sound 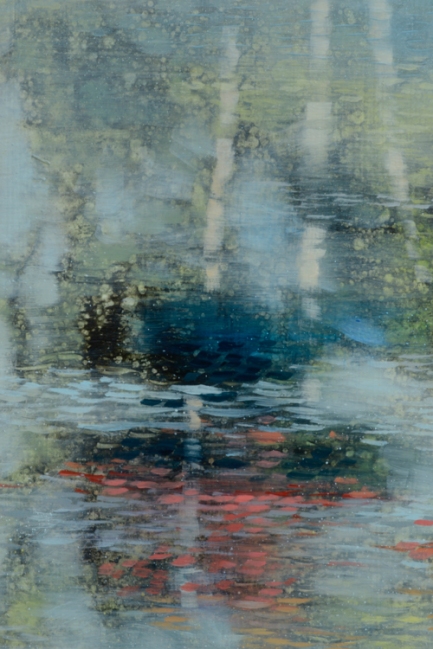 Brian Eno is an English composer, musician, singer, visual artist and record producer. His explorations of various styles of music, and pioneering work in ambient and generative music was in part inspired by minimalist paintings. His numerous cds are widely available. He is brilliant.