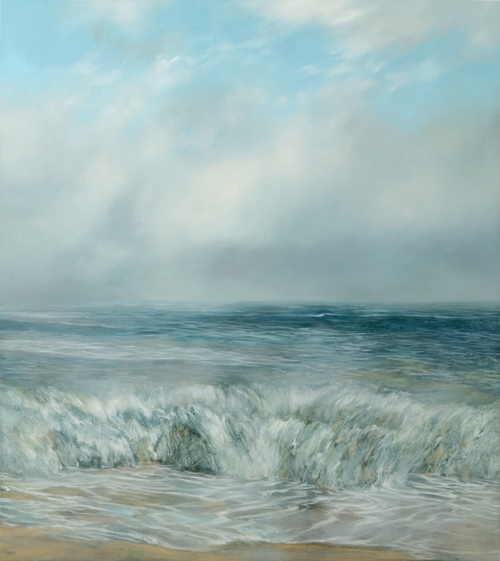 Slipping Away, a common enough phrase with many meanings, all of which might describe my painting. There is the meaning of vacating – getting away, leaving behind one’s worries and responsibilities. There is also the sense of disappearing, dissolving, evaporating, leaving no trace, as in the way the remnants of fog will soon evaporate. Or the way the waves build then retire, leaving, briefly, a frothy lace. It can also refer to memory – the memories we lose and the ones that need to part from us for a while. The action in the painting refers to nature, but the metaphors are ours. Details below. Enjoy!

TM8565 Slipping Away – detail of wave

Technical painting notes: To keep a sense of crispness in the initial layer of brushwork describing the wave, I use Liquin Impasto medium mixed into my color and a chip brush. Glazes of raw sienna and gold ochre suggest the sand carried by wave.

2 thoughts on “Slipping Away”