I hadn’t planned on starting any snow paintings.  It only took a couple of crisp nights to put me in the mood. I pulled out my reference binder of favorite winter photos, and from that point I couldn’t resist. Maybe it’s the look of bright white snow against the remnants of fall color, or the orange red glow of scrub growth with snow and a blue sky. The six small paintings (will it be a series?) mark my foray into winter, and my anticipation of the bracing season that waits around the corner of November. Enjoy. 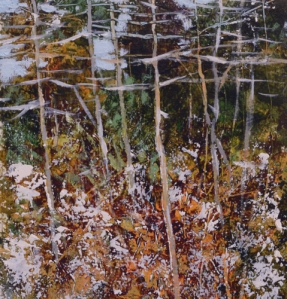 Technical painting notes: The first two paintings are on a primed, rough watercolor paper. The texture of the paper strongly influences the feel of broken color.  I liked the casual effect, but wanted to try a smoother paper. The next four paintings are on smoother, acrylic gesso- primed rag paper. The smoothness allowed for finer detail. All the paintings were developed in layers, with a base layer of roughly laid in color mixed with Liquin Imasto medium. When the base was dry (usually the following day) I went back into the painting with selective knife and brushwork to bring out details. Sometimes I find the inclusion of pencil drawing at this stage, defining the image but separate from the blocks of color, enhances the overall effect and keeps the image fresh. 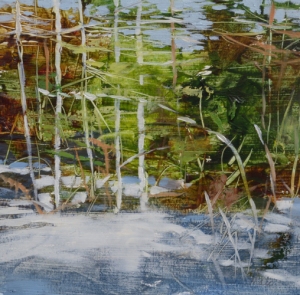