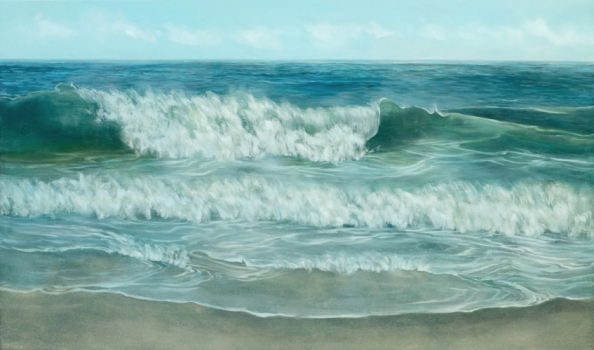 I think of the beginning –  air, water, land – and that sound. So primal and so eternal. It is the simplicity of these three elements interacting that intrigues me. Endless permutations and configurations, governed by precise rhythms. I can lose myself in the intricacies, my arm following the curve of a wave, my face feeling the imagined spray. Working with brush, roller, and paint I can share the moments.

Technical painting notes: The painting began with a roll-up of dark blue oil paint on the white, primed panel. I used solvents and linseed oil to manipulate the paint, spritzing the surface with droplets of the solvent then re-rolling the surface to create the impression of layered, active, water. A small amount of burnt umber was rolled into the foreground to suggest the beach. When this base layer was dry, I began refining the structure of the waves using traditional brush techniques and translucent pigments. Layers of transparent glaze were interwoven with the brushwork to create depth and luminosity. I experimented with spattering droplets of thinned white paint or solvent into the glaze to suggest spray along the wave’s crest, and used spattered and rolled white paint int he foreground to suggest the foam (air) in the restless water.

One thought on “Nothing Less, Nothing More”