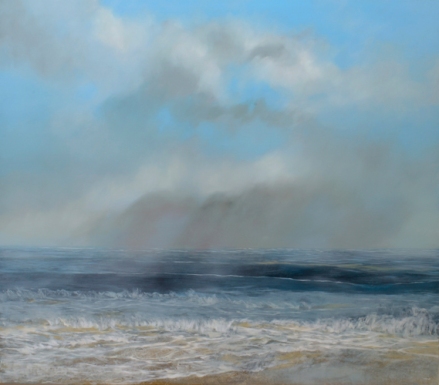 Wait a minute, and it will change – we say that about the weather around here, but it’s true about many things. This view began as a sunny day, until suddenly a squall pushed its way into a dramatic punch. Then it was gone, Just Like That. The wind, with its waves and white caps, was powerful. I’m thankful I was near shelter when it came in, but oh I  loved it! Details below. Enjoy.

Technical painting notes: The sky was painted with soft brushes, laying in the values first. Later, I glazed semi-transparent color over the base layer to modulate the tones and adjust color using a soft, watercolor mop brush.

As I worked on the turbulent water in the foreground, it became too exact and finicky, so I used my soft rubber roller to roll over it (while wet) to see if that would create some chaos appropriate to the whole mood of the piece. It worked. As the foreground became “scumbled” under the roller’s effect, I found I could pull out a few details and it was enough to suggest the feel of the moment without overwhelming detail. It also served to quiet the middle ground under a blue gray tone, suggesting shadow.

TM9142 Just Like That – detail with roller coming in